Now through December 17, score 25% off everything in our store (including pre-orders) using discount code "holiday20" at checkout. All physical orders will receive our 2020 holiday ornament designed by Saoirse Alesandro (while supplies last). For the first time ever, we have e-gift cards available. They make great stocking stuffers for the music buff in your life. 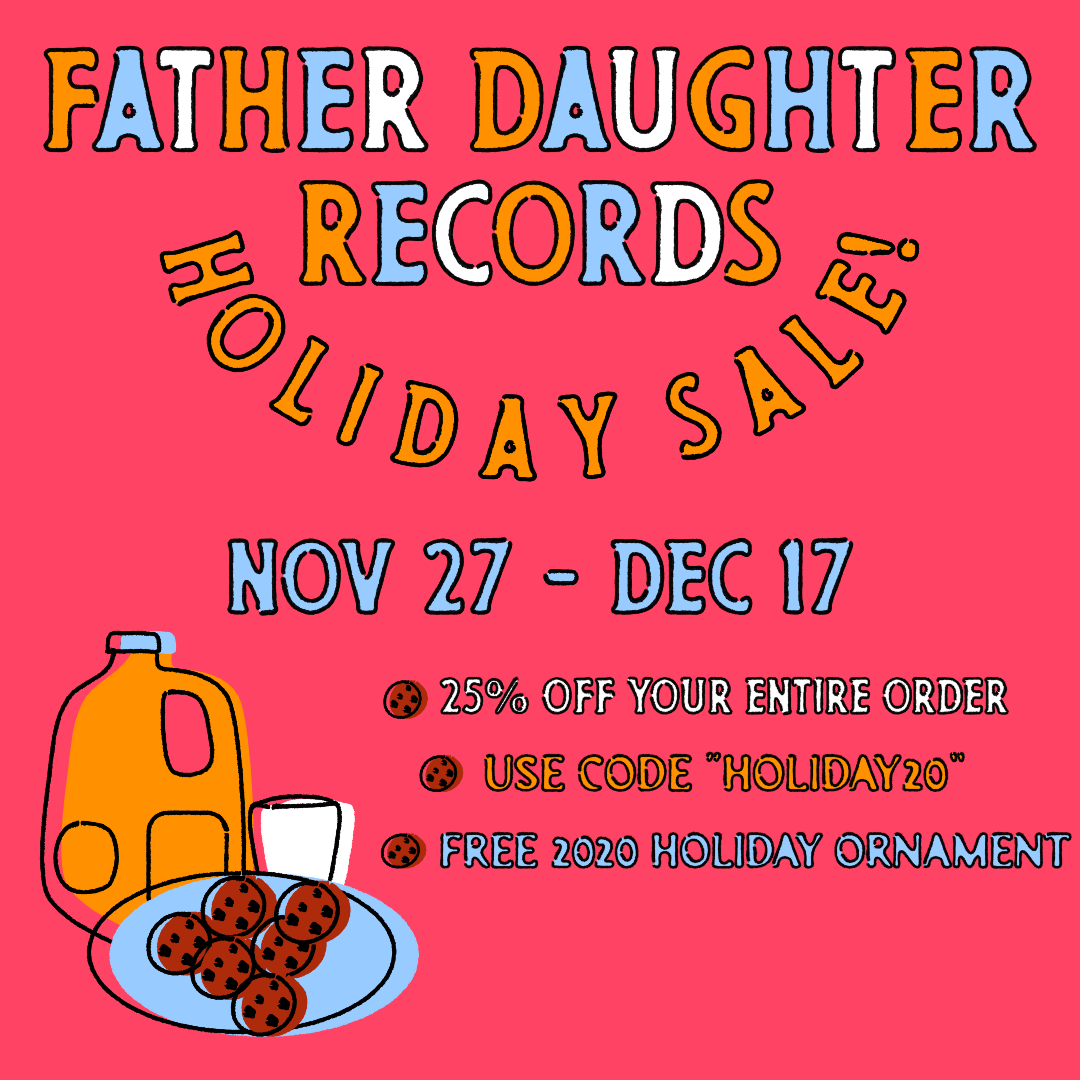 Anna McClellan's newest full-length, I saw first light, is out now! Watch the new music video for her song "Raisin"

Anna says the following about the track:

"I have long romanticized the idea of jumping off a cliff, and categorized it as the perfect metaphor for letting go. If I could only take that leap of faith, I’d awaken. I’d been wanting to capture the idea in song for a while and thought it would be a longer and more epic endeavor. And I’m sure there is still much more to say about it. In Raisin though, upon jumping, the subject appears to float and become weightless. Never actually landing at all." 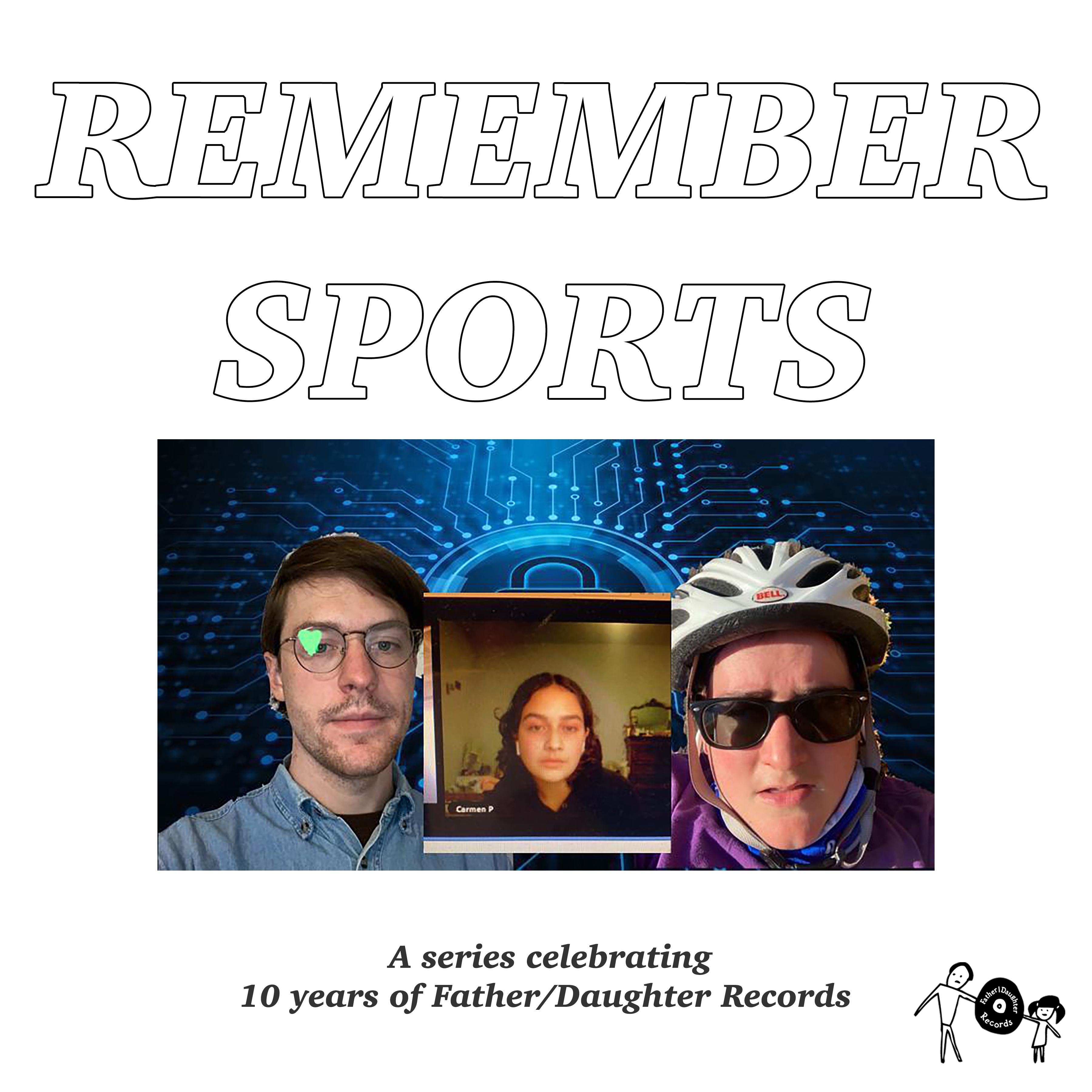 Father/Daughter: How'd you first hear of / begin working with F/D?

Carmen Perry: We first heard of Jessi when they bought our album on bandcamp in January 2015. I don't think any of us had heard of Father/Daughter till we saw Jessi's email address, and then we saw that they were releasing cool stuff, so that's when we first sort of became aware of them. Later that year we recorded All of Something and thought of F/D when we were looking for someone to put it out. I looked up the email lol and this is what angel Jessi said when we sent them our mixes and asked if they wanted to release it: "Well these are super good. Been listening pretty much nonstop since you send them yesterday (except to take a time out to see buddies Field Mouse & Hop Along last night). So yeah, let’s talk about Father/Daughter releasing this! Are there lyrics written out somewhere? I love to read along while listening." :)

F/D: What were some inspirations for some of the original songs on the record?

CP: Oh gosh. Mostly my stupid year-long fake relationship from freshman year of college. I wrote a lot of the songs that first summer while I was at home. I guess it was a period where a lot of changes were happening very quickly, and writing songs about it was a good way for me to deal with them and try to keep up with my new life. Being a teen and also being a new adult at the same time is tricky. It was an uncomfortable time for me, but I wrote more frequently than I ever have since. I think if there's one thing I can always find songwriting inspiration in, it's change, because I don't handle it well in basically any capacity.

CP: I've only ever been from New Jersey and that feels particularly poignant to me, since everyone hates us. It was a boring place to grow up, but I've found that a lot of the things I've accomplished in my life thus far have been born out of boredom, so I've come to really appreciate where I'm from.

CP: We recorded in our college's radio station where people were also doing radio shows and could see us through the glass, so we were being watched by someone at pretty much all times during recording. That was hard for me because I'm shy and don't like being looked at, especially when I'm singing and no one else can hear the music lol. I remember doing the loud part at the end of "I Liked You Best," just straight up yelling while someone was trying to do their radio show. Obviously it was disruptive. I believe I did that in one or two takes because I just wanted to get it over with and hide.

CP: Well obviously all of them...... but PLLUSH Stranger to the Pain is so eternally baller. I miss those guys. Oh My by Nadine too is so good, Anna McClellan's first album and Tasha's Alone at Last <3

CP: Well first things first, we MUST go to Europe with Ratboys, then we wanna tour with any of our friends, who we miss so much. It's sad how many of my friends I only get to see on tour and don't anymore. After that our dream tours would include Courtney Barnett, Tegan and Sara, Haim... we're aiming high once this is over. Putting it out into the universe now.

F/D: What've you been up to since the rerelease of Sunchokes?

CP: It feels like nothing much because 2020 has been such a train wreck and we haven't been together at all, but I guess we did record a new album last fall... Plus I started a patreon where I'm putting up demos, covers, and writing stuff and livestreams, so that's been a new and exciting path for me. I've always liked writing, so it's been a good outlet for that. And obviously I'm playing a lot of sims.

Anjimile has shared the Eleanor Petry-directed video for the Giver Taker single, "Baby No More." Watch it below!